This is For Real

The message is crystal clear: Do not bury your head in the sand. There is real trouble out there and, although late, it’s finally being acknowledged. The OECD's press release from last week goes a step further in acknowledging the scale of the problem:
“The global economy is set to weaken sharply in our projections. We estimate world growth to be 3 per cent in 2022 – down from the 4½ per cent we projected last December - and 2¾ per cent in 2023. Inflation projections now stand at nearly 9% in OECD countries in 2022, twice what we were previously projecting.”

The ‘eminent’ economists at the OECD are finally getting it. There is no more talk of delusional strong growth and low inflation forecasts. Albeit late, the extreme inflation pressures weighing down the global economy are being more widely recognised.

Economic data releases, too, continue to paint a dismal picture. Data release last week showed US consumer confidence slumped to a seventy-year low in May. Pessimism is clearly taking hold as even at the peak of the pandemic when countries were under lockdown, consumer sentiment was significantly more robust than it is today. Households and corporate are mindful of the fact that this time, unlike during the COVID crisis, policymakers are not on their side. No government is about to provide a significant tax cut or a central bank about to deliver ultra-low interest rates.

ECB playing catch up
As a sign of the times, the ECB last week sent a clear signal that it is set to accelerate its monetary tightening. The central bank is committed to raising interest rates by 25bps at its next meeting, which will likely be followed by a further 50bps rate hike at its subsequent meeting in September. Alongside a rise in interest rates, it will start close off quantitative easing by ending its bond purchases from July.

The robust stance of the ECB has sent shockwaves through the Eurozone bond markets. While the 10-year German bund yield was up around 20bps on the week, yields for Italian, Spanish, and Greek government debt yields rose by 35bps, 30bps and 50bps, respectively. It's like the days of old. German and Swiss debt have become the pre-eminent safe havens. At one point in the past year, Greek debt was +96bps over German bunds. That spread has now risen to +280bps.

The level of eurozone absolute yields still looks very low when considering eurozone inflation is around 8%. The real 10-year German bund yield (after taking into account inflation of 7.9%) is -6.4%, the craziest in decades! The average real yield of the past 20 years has been +1.5%; hence the argument would run that the German bund should logically yield 9.4%. However, that would be too simplistic. But let's just say that we agree with the ECB’s forecast that eurozone inflation in 2024 will drop to just 2.1%, which would still imply a German 10-year yield of 3.6%, more than 200bps above where we are today. 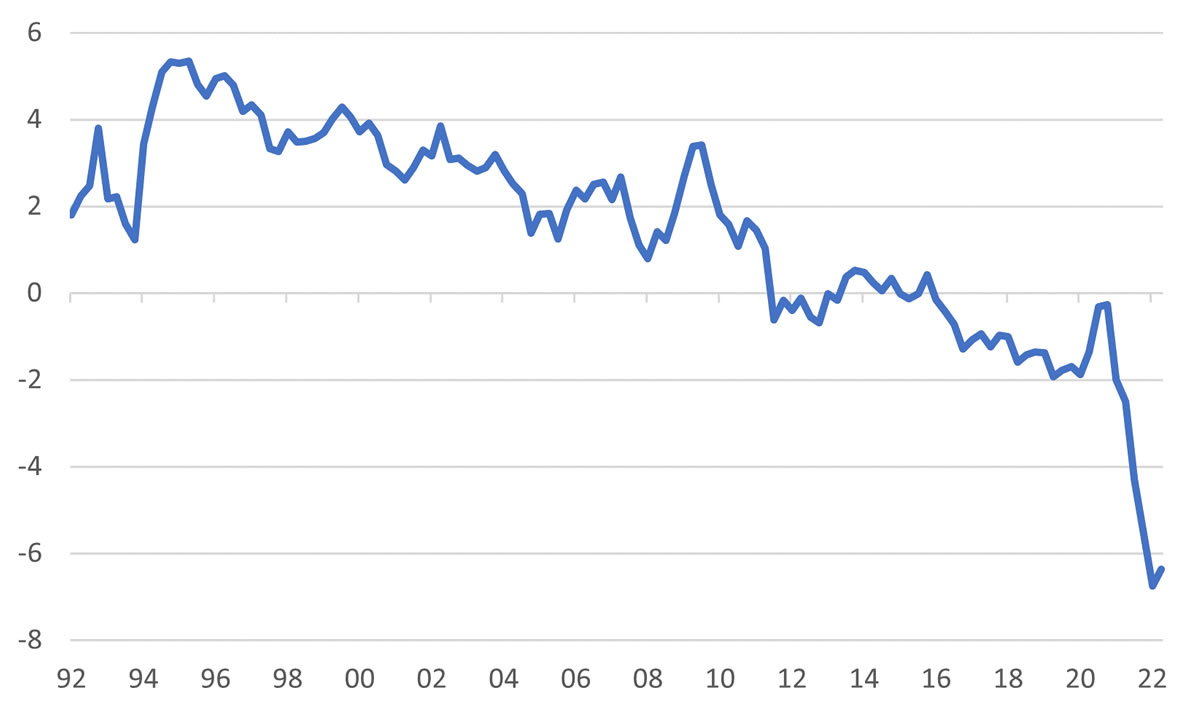 Source: Bloomberg
(From Delft Partners market commentary in early May 2022: - A note on the Euro sovereign bonds:- Sovereign spreads between Germany and France and France and Italy are widening again as the ECB hints they will be tightening as the Germans have had enough of the "Inflation passagere' nonsense from Mme Lagarde at the ECB. If anyone is caught between a rock and a hard place it's the ECB - tighten as they must to squeeze inflation, and they risk a spread crisis; don't tighten and they get more inflation and a crisis anyway. We still avoid Euro banks. They have also been walloped by Russian write-offs.)

Note how the Euro sovereign bond spreads are widening to the point where exit risks need managing. 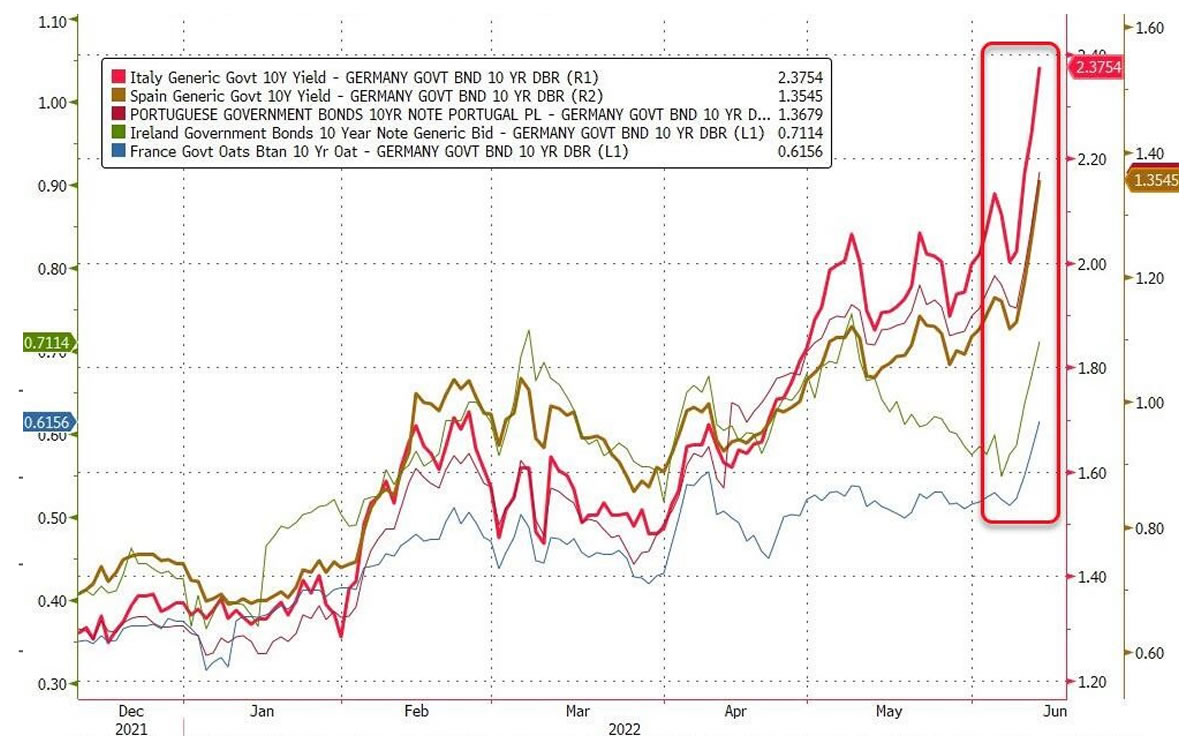 FOMC to increase 50bps this week, the Bank of England maybe too
The Federal Reserve's FOMC meets this week amid market expectations of a 50bps rise in the fed funds rate. As we pointed out last week, the markets are still, to our mind, underestimating the degree of tightening likely from the Fed. We see too much emphasis placed on the idea that a slowdown in the economy would lead to the Fed backing off from tightening. While the Fed does indeed have a dual mandate of price stability and full employment, the former takes precedence over anything else. The 8.6% inflation for May is a million miles away from that much desired price stability.

This week, the Bank of England's MPC meeting is expected to deliver a 25bps rate increase, but there is an outside chance of a 50bps hike. Indeed, with the UK government toying with the idea of 'populist' tax cuts, the MPC may have to increase rates more aggressively in the future.

The equity markets will start the week nervously. After the US inflation news, the US equity markets ended the week on a tepid note. The S&P 500 index sits right on the critical support of 3900. The next meaningful support is at around the 3350 level, which equates to where the markets were at the start of the COVID sell-off and gets us closer to a level that is more consistent with the trend growth of corporate profits.

Look for the weak linkages in the global economy
Something we will develop in the coming weeks is to set out where we believe the weak linkages in the global economy could cause us more trouble. Some, like Sri Lanka, have already been picked off by the markets. There will undoubtedly be more. European banks will be vulnerable to more spread widening let alone a Euro crisis. The global economy cannot go through this shock and not have consequences. We are particularly concerned about consumer credit. US data shows that outstanding credit card debt has picked up significantly recently as consumers try to maintain their spending power amid surging inflation. Apple's move into the buy now, pay later (BNPL) market reflects the risk of shadow banking building up debt. In the UK, a survey by Citizen's Advice showed that UK shoppers relied on credit cards to repay their BNPL debt. A staggering 50% of 18–34-year-olds use their credit cards to repay BNPL debts.

China one of the bright spots
On a more positive note. China continues to (largely) give the impression of bouncing back from stringent COVID lockdowns and with a glimmer of hope for less aggressive reforms. May export data showed a 6.8% month-on-month recovery, reversing April's weakness. Also, there are reports that China's financial regulator is considering plans for a revival of Ant Financial's stalled IPO. Any sign of moderation in the harsh crackdown that the Chinese tech sector has faced would help rebuild market confidence. The equity market has rebounded 10% from its April lows and has been a steady performer even with the problematic global backdrop.

Caution advised
Our advice remains very much what it has been all this while: we are extremely cautious on ‘concept’ equities and bonds of indebted countries, expecting both asset classes to disappoint. We prefer selective exposures to dividend plays in developed market equities, China and Latin America equities in the EM. The upward and flattening yield curves offer some attractive yield in short duration. We would advise caution in credit markets; last week saw high yield spreads widen after the recent better performance. We would advise to be fully exposed to gold.