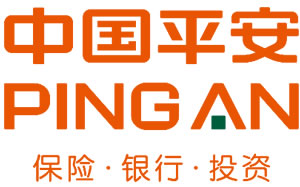 We prefer to pay less for future earnings and dividends. If we can find a stock whose future prospects are even only a little better than the market expects, we make good money. Human biases and desires to be in crowds often produce unloved stocks which are merely misunderstood and yet very likely to be re-rated. We think this pool of unloved stocks is a fertile fishing ground. Our fundamental research work tries to identify the source of change and the catalyst for a re-rating. Spotting the cheap bit isn't too hard! Anyone can run a screen for low P/E! Not everyone can see what's hidden.

Very often the market fails to appreciate the benefits of 'hidden technology', a subject on which we have written before with reference to auto parts companies. One such stock which was misunderstood and had considerable hidden technology, and therefore growth potential, is Ping An Insurance in China. We have owned this for a while and like many of our investments we have had to be patient.

Now looks to be a good time to describe the business a little more because the share price is certainly making up for lost time. Below we show a 2-year chart (roughly our holding period) and then show another where we compare its return against the then market darling Facebook at the time we invested in Ping An. 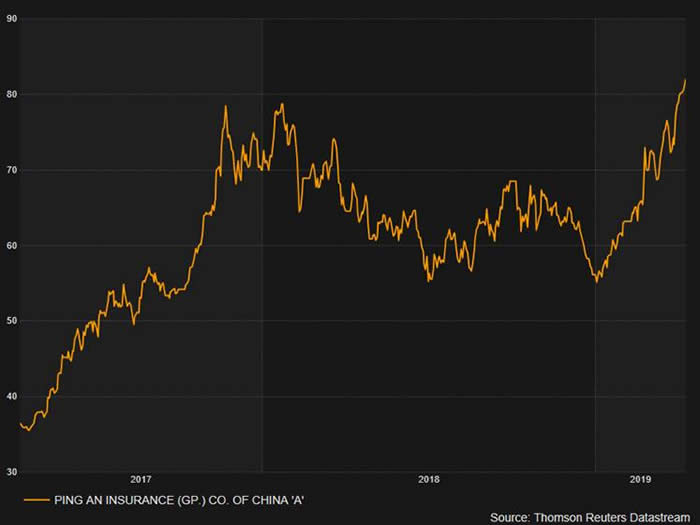 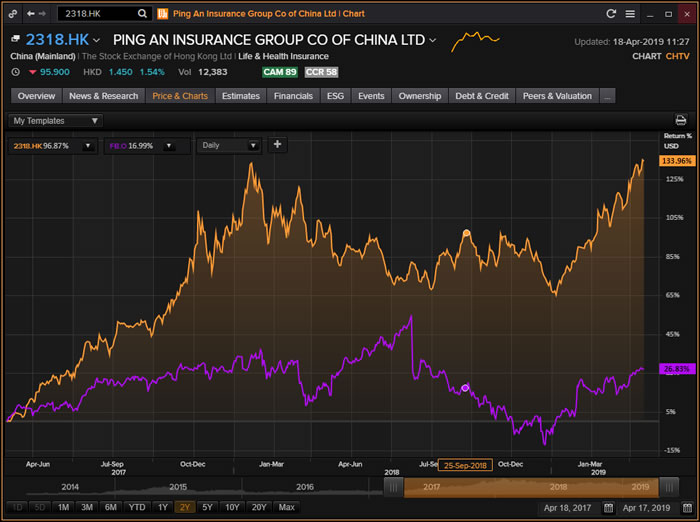 You don't have to pay a high P/E to get good growth in capital. In fact, you shouldn't. We can't repeat this enough.

Ping An Insurance is the world's second-largest insurer by market value at almost USD 200billion. The company also has sizable banking, asset-management and fintech arms, and has made very heavy investment into technology particularly large data analysis known as Artificial Intelligence. (A.I.)

China is arguably ahead globally in A.I. because of minimal personal protection on data privacy. For example, CCTV covers much of China's cities and facial recognition technology means that even litter bugs are noted and receive 'social demerit points'. Consequently there are massive amounts of data to be explored and used by government and companies. Compare that to Australian attitudes where the government recently asked if citizens wished to share their medical records in order to better deal with emergencies and received a resounding 'No'.

Ping An can therefore implement and use technology based on this data collection in ways impossible in tighter regulated USA, Australia and Europe.

Let's list two examples of technology in action to drive growth and improve profit quality. Ping An made a record $16 billion net profit in 2018, over 20% up from 2017.

We have had first hand interaction with the asset management business and can testify they know what they are doing and appear to be reasonably independent from government interference in what kinds of debt in which they invest. No slush fund for politicians there.

We have been concerned and wrongly so about China's banking system and Ping An bank was a worry. However an improving capital ratio and a declining share of poor quality loans has reduced that concern and this has probably been a catalyst for a re-rating of the business?

We continue to own this in the global portfolios and at about 10x next year's earnings it remains relatively cheap to us given the demographic and middle class thematic in China.

This is proof if you like that a global portfolio should explore outside the USA and invest in companies whose share price will be driven by local investors realising the potential, rather than simply paying up for USA companies?