Advantage Advantest? Or why are Japanese technology companies so overlooked?

This article was prompted by the announcement recently that Verizon was selling Tumblr for a few million $. Tumblr is / was a social networking site that allowed users to blog personal stuff to each other. A couple of years ago Tumblr was reckoned to be worth $1bn. Verizon, a telecom company, was probably never a good owner of that business and clearly lost out to Facebook in the search for users and personal data to on-sell. So, did something unique to Tumblr go badly wrong; or is it that Tumblr is another example of a company vulnerable to the increased charges in depreciation and amortisation that should ideally be applied to the carrying value of assets of companies which operate in fast changing industries? Another recent example of sudden loss of value, and not in the technology sector, is Kraft Heinz which suffered another write down in the carrying value of its assets recently.

Regardless of which business you manage, you have to invest to maintain an advantage - if you have one at all to start with. If you don't then you need to invest more or exit.

It strikes us as an underappreciated risk, and a paradox, that the proponents of investing everything into digital platform companies, because of their ability to create and capture rapid change in the economy, are then failing to accept the fact that this rapid change may require more aggressive write downs of the existing technology AND higher levels of capital investment and R&D by these companies, to stay ahead? Simply put, faster change and more competition, requires more aggressive depreciation and more spending on R&D. Recent accounting changes now classify R&D as capital investment so even as a 'capital light' business, there is still quite a lot of capital/ R&D required. These requirements to invest more have implications for investors and the required risk premium of the companies.

If Tumblr can see such a rapid descent from lofty valuations, due to rapid change in the industry, then why can't it happen to other companies, and how can it be prevented?

The answer to the first is it can and should. Capitalism works because capital is free to enter and leave industries. If the playing field is level, then fair competition will create winners and losers. Monopolies, in the absence of competition, are generally good for the owner of the monopoly but pretty terrible for everyone else. They are undesirable and tend to be regulated away.

So, we watch with interest the increasing competition for eyeballs between Netflix, Disney and numerous other entrants to the "digital viewing platform fight". First mover advantage appears to be over and a lot of money will now have to be spent on programming to maintain that advantage; and if that happens then dividends won't grow or appear for a while longer; cashflows won't pay down debt, and generally enterprise risk will rise. This should be reflected in a higher risk premium demanded of the listed equity.

The answer to the second question for company management is "invest more; innovate; spend more on R&D". This sort of presents a conundrum for investors because companies which have spent less on capital and preferred to buy back shares have tended to perform better in the stock market.

What is good for the long term health of the business is not being rewarded by the stock market.

Maybe we can, and to do so we would recommend that investors look a little more keenly at Japanese companies. They have actually tended to invest too MUCH and as anyone who visits companies there can attest, you could eat lunch off most factory floors such is the (too) high level of maintenance. This over investment has caused problems for shareholders by depressing returns and dividend growth, but we think this habit is being tamed. This is what makes them attractive.

One company which spends sensibly would appear to be Advantest, which we own in the Asian equity trust. The company is a semiconductor test equipment business. Essentially it ensures that the production lines which make DRAM and flash memory, are working and production yields for the chip makers remain as high as possible.

Results from Advantest were announced in late July and were not as bad as feared. The company beat expectations of operating profit by 50% (which is actually a problem in that the company obviously didn't keep the market updated with how well it was doing, and communicating with the stock market is beneficial but we'll maybe leave that for another time?)

While the industry is cyclical, it is growing and will continue to grow. Quoting from the recent shareholder communications, "Demand for semiconductor test equipment is influenced not only by change in device production volume but also technological evolution trends in semiconductors. Miniaturization further improve the performance of semiconductors, reduces their power consumption, and increase semiconductor test time and the complexity of functional test processes." The first part is good for users of technology, the second is good for Advantest.

It would appear that spending money on R&D is essential for a tech company to stay ahead. Advantest has spent approximately 17% of its revenue on average on R&D pa over the last 5 years. This compares favourably with USA tech companies such as Facebook which has ramped R&D very aggressively in the last few years and Alphabet and more than favourably with Apple (5% of Sales) and Netflix (8%)

The last 5 years has seen Advantest grow revenues by over 11% pa and net income by over 25% pa. Dividends have grown by 47% and thus it would appear possible to find a company which can grow sustainably; keep a competitive advantage and keep shareholders happy with a dividend? It maybe you have to look at Japan?

With a prospective P/E of under 16x (approximately the same as Apple and much less than that of Netflix at over 100x) and a dividend yield of 2% which is growing this looks a strangely ignored technology winner well able to deal with increased competition through prudent investment and development over many years. Unlike perhaps some USA companies which may now have to play 'catch up' in R&D as more competitors arrive?

For what it's worth, there are more innovative technology companies with sound and defendable positions, listed on the Japanese market. We leave you with this chart which shows high quality R&D spending globally compared with the number of high quality patents filed by country. Our advice? Don't keep overlooking Japan. 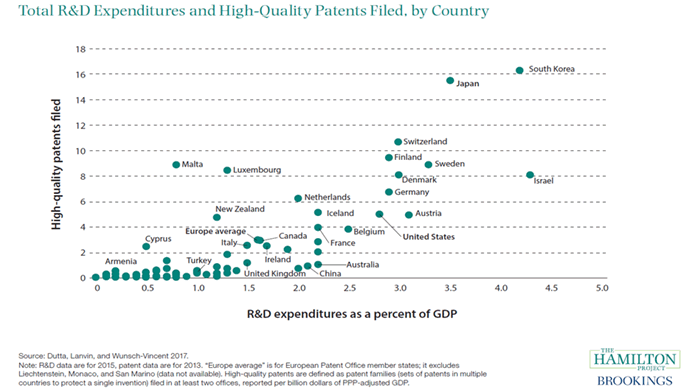