Improving Returns for Shareholders in Japan

It has taken several decades for companies in Japan to once again focus on providing their shareholders with good quality returns. One of our key measures of quality is return on equity, you can see from the graph below that return on equity for the market in Japan fell away sharply in the 1990s and 2000s in the aftermath of the 1980s liquidity bubble, before starting the recovery back towards double digit returns in the current decade. A key factor in the focus on improving return on equity has been the adoption of the corporate governance code from 2015 and an aggressive push from Prime Minister Abe.

In previous decades companies in Japan have hidden behind defensive cross shareholdings to protect themselves from hostile takeovers. That protected environment has now largely disappeared. Increasing Merger and Acquisition (M&A) activity in Japan together with the development of good governance equity indices in recent years has provided a wake-up call to previously sleepy local management, the response has been a dramatic improvement in management efficiency. 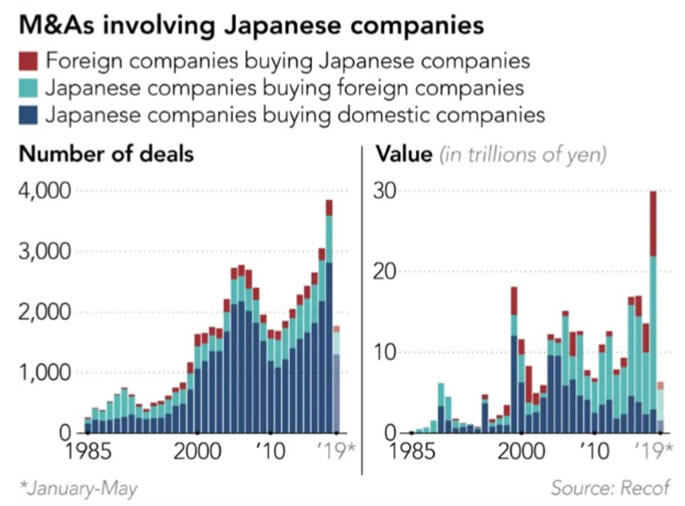 In April 2019 there were 309 M&A transactions domestically in Japan, a 23% increase over the previous year. Since the start of 2018 the pace of transactions has been averaging 200 per month which is a doubling of the level from five years earlier. Global private equity giant KKR has declared Japan as their highest priority market outside of the United States. Many of the small transactions we are seeing in Japan involve the disposal of non-core businesses to companies better able to manage those assets, hence the improvement in shareholder returns being observed in the overall market.

The current generation of business managers in Japan have typically experienced training at the best international business schools and have a mindset better directed towards efficient management of the business instead of a focus on their own lifetime employment in the protected structure of a company that is safe from takeover activity. There is far less fear associated with job losses in an acquired business now that labour is in such short supply in Japan. The government is quietly increasing the scale immigration in response to the shortage of labour, however, there is a long way to go before Japanese workers need fear the impact of M&A activity in the jobs market.

There is now widespread recognition in Japan that selling a peripheral business is a positive not a negative outcome, peer-to-peer mergers are becoming a key driver in the improving returns being achieved.

Japanese companies have significant cash reserves available to fund acquisitions, 50% of companies in the Tokyo Stock Price Index (TOPIX) have net cash and the average gearing levels shown in the graph below has dropped to zero, as companies hoarded cash in the past decade. 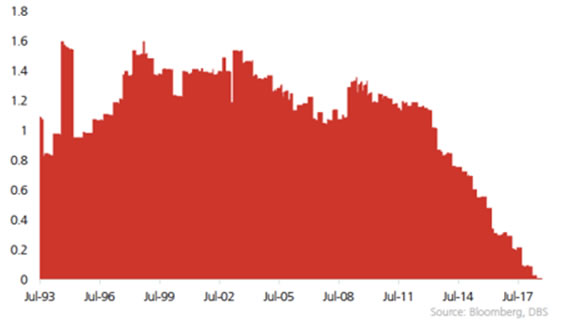 Cash reserves for Japanese companies now comfortably exceed USD 2 trillion. In addition to increased M&A activity we are starting to see companies use some of this excess cash for buy-backs. In the face of increasing demands from activist shareholders, one of our global portfolio holdings, Sony, has announced two tranches of buybacks amounting to USD 2.8 billion, equivalent to just over 4% of market capitalisation and the share price has responded positively. In the longer term it will be very difficult for Sony to resist the pressure from activist shareholders to sell assets, especially the financial services and semiconductors businesses.

One of our Asian portfolio holdings in the Japanese real estate sector, Open House, has recently become the target of a Washington based “friendly” shareholder activist investor Taiyo Pacific Partners (TPP) having announced a stake in excess of 5% in May 2019. TPP has endorsed the current strategy of the company and stand ready to engage with management regarding future measures to enhance returns to shareholders. Open House has a focus on providing affordable single-family housing, with lot sizes at half of the historic norm in Japan. This strategy has proved very effective in an environment of declining household size in Japan. We expect to see more of this type of “friendly” engagement between international activist investors and Japanese companies now that there is a shared ambition to improve shareholder returns.