The purpose of this article is to outline Asia's strength in the field of innovation, areas of caution to be noted with respect to the quality of innovation and some examples of innovative Asian companies in our portfolio.

The Harvard Business Review (HBR) White Paper entitled "Asia: The New Face of Innovation" has outlined the three key reasons behind the growth of innovation in Asia.

The HBR paper gives examples of 12 multinational companies that are directing more of their innovation strategy towards locations in Asia. In addition to traditional locations of Korea, Taiwan and Japan there is evidence that Singapore is emerging as a very powerful force for innovation in the region. 3M Singapore cited support received from the Housing Development Board by conducting trials of their 3M Channel Lighting System as a key element in taking that innovative product to the market. One of our portfolio companies, Makino Milling of Japan is mentioned in the HBR paper having selected Singapore as the location for a new "smart factory". Makino made the point that diversity was a key factor in the choice of location, they have 14 nationalities represented at their Singapore location. We will return to the development of "smart factories" later in this article.

When Bloomberg published their list of most innovative countries for 2019 this month, South Korea once again topped the list while Singapore and Japan retained their places in the top ten countries. The top ranking of South Korea was underpinned by Samsung Electronics registering more patents in the United States than any company other than IBM since the year 2000. Aside from patent registrations, the rating for tertiary education is a key factor in the overall score and this is where Singapore is very strong, among the best countries in the world along with South Korea and Japan. The HBR report states "With a strong emphasis on education, Asia provides a ready supply of people ready to contribute to the innovation cause."

When it comes to research and development (R&D) spending, South Korea spends 4.2% of GDP on R&D which is second only to Israel, while Japan and Taiwan also both spend in excess of 3% of GDP on R&D. The OECD average for spend on R&D is 2.3% of GDP, the United States is ahead of that average at 2.7% while the European Union and China are laggards at 1.9% and 2.1% respectively.

When looking for signs of innovation it is tempting to look at the numbers of patents being granted, however, patent counts are an imperfect measure since they vary in quality and importance across locations and over time. The United States Patent Office currently receives six times as many applications as it did in 1980, the rise in numbers elsewhere especially in China has been even more dramatic. The tables below show the increase in patent applications and approvals in China since 1980 and especially in the past decade. 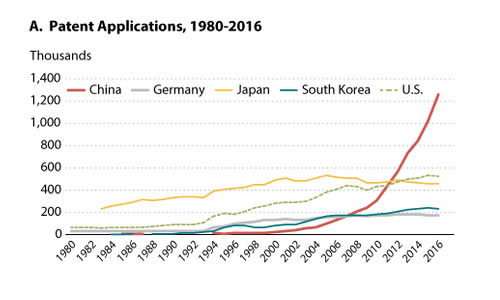 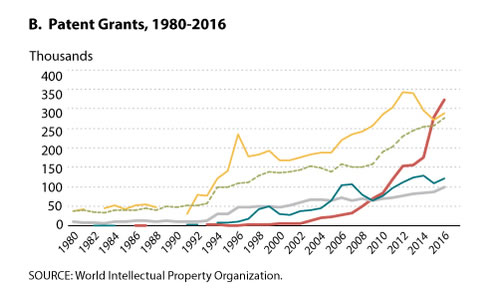 The diagram below from the World Intellectual Property Organisation database shows just how dominant Asia has become in patent applications, more than 65% of all applications worldwide, the shaded area shows the share of Asia in each category of intellectual property in 2017. 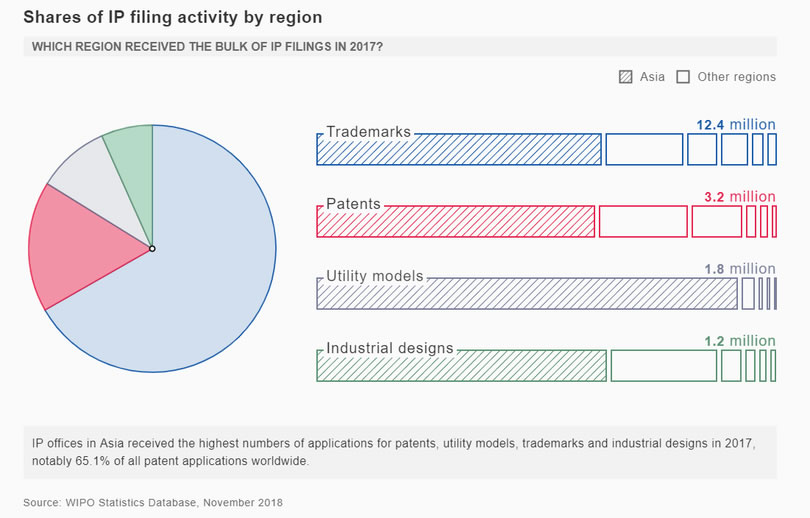 While China now accounts for more than 43% of patent applications worldwide, some care is required because there is no doubt that China has been playing the numbers game of quantity ahead of quality during the past decade. 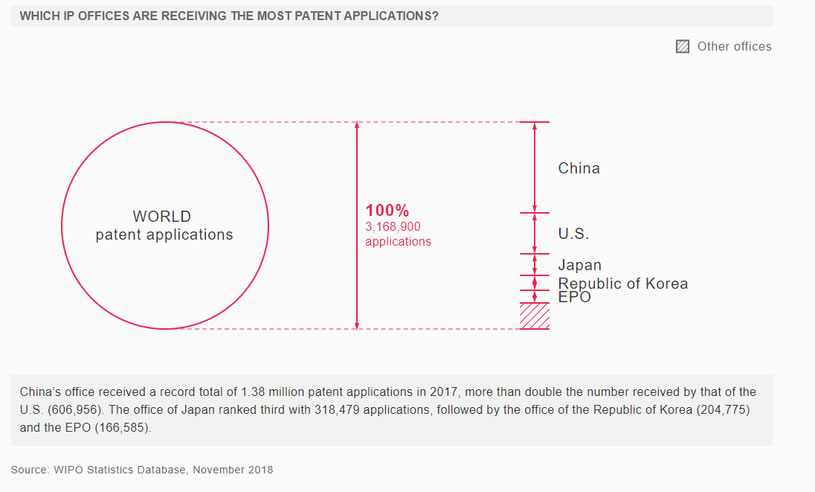 There are several elements that can be used to assess quality of patents as follows:

In each of these areas China scores poorly versus their global peers:

The chart below shows the Hamilton Project comparison of countries looking at R&D spend to GDP against high quality patent applications (filed in more than one country), this gives a better indication of the relative importance of China in the area of innovation. Using this approach, South Korea and Japan are leading the field globally and this fits with our experience of finding innovative companies; this is one reason that Japan and South Korea together comprise two-thirds of our Asian equity portfolio. 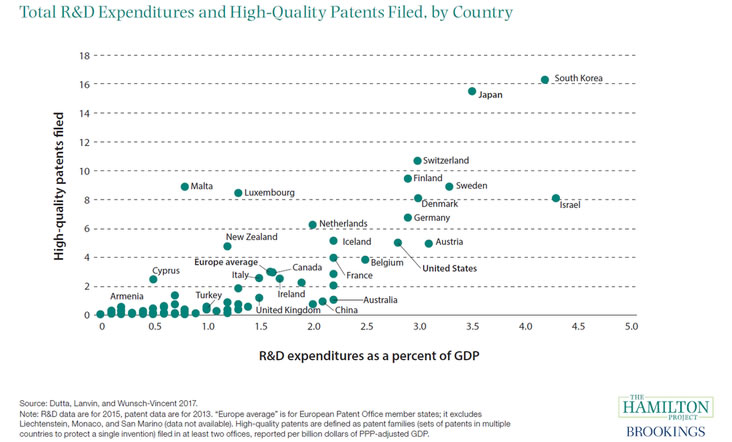 When considering innovation at the company level the MIT Technology Review conducts an annual survey of the 50 most innovative companies globally, the most recent survey showed 10 Asian companies in the top 50 versus just 3 Asian companies back in the 2011 survey. In some ways the MIT survey is a better representation of innovation in Asia, the United States is still a strong force, but the challenge and forward momentum is coming from Asian companies. Interestingly Europe has just 6 companies listed in the top 50.

We can illustrate the importance of innovation with two examples from our portfolio, TS Tech of Japan and SFA Engineering of South Korea. TS Tech is a leading holder of patents in the field of car seats, the company holds 787 patents in Japan and 481 patents internationally. The diagram below from a recent report to shareholders shows the analysis of their patent strength in Japan and the United States undertaken by an independent research house. In the past decade TS Tech have improved their positioning in patent strength versus the peer group of companies in the automotive sector both in Japan (7th to 1st) and the United States (8th to 2nd). This strength in patent quality is one of the elements contributing to a positive assessment of the company's management and strategy. 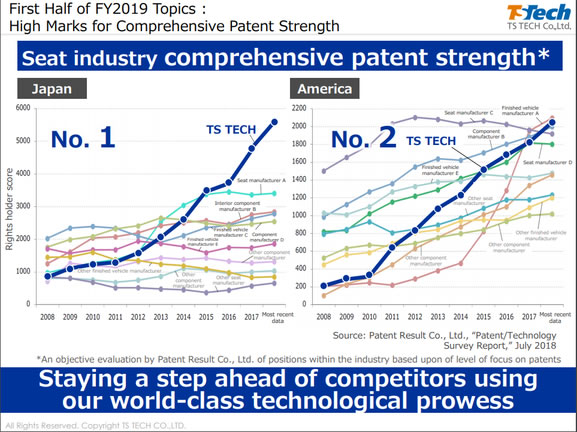 SFA Engineering is a leading company in the fields of material handling systems (logistics), precision equipment, technology for OLED panel manufacturing and printed electronic equipment for the manufacturing of semiconductors and electronic components. SFA Engineering holds 446 patents in South Korea and 88 internationally. You can see from the company strategy presentation, SFA Engineering has the objective of being the number one provider of "smart factories". This objective is supported by government policy in South Korea which aims to encourage the development of 30,000 new "smart factories" by the year 2022 assisted by various grants totalling USD 3.5 billion. 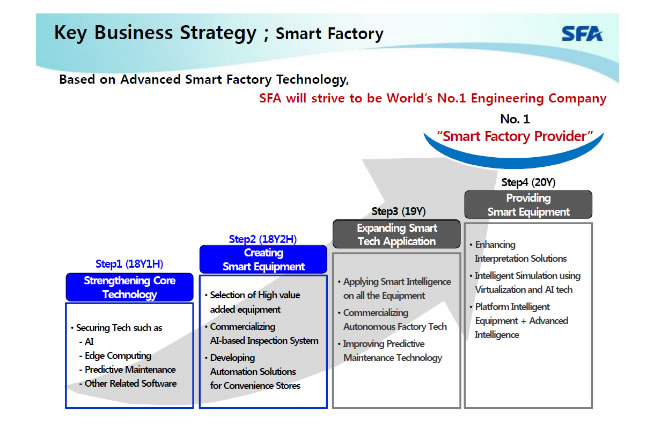 The demand potential for "smart factories" is illustrated by the diagram below showing the requirement to substantially increase use of robots in the automobile industry especially in China and India. 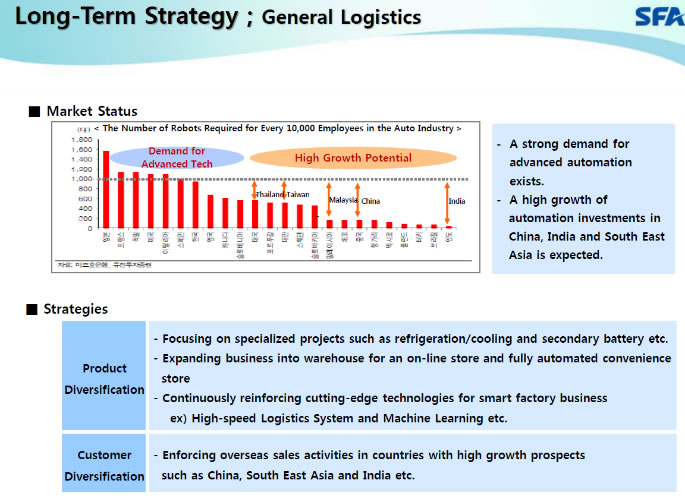 The demographic profile in China has seen the total labour force peak at 787 million people in 2016, going forward China will look to aggressively substitute technology for labour. China is going to be a major customer for "smart factory" technology as a result of the declining labour force.

In conclusion, Asia is demonstrating increasing strength in the field of innovation, the key supporting factors are strength in education results, the world's highest levels of R&D investment ratios and appropriate levels of government support. The headline numbers for patent applications tend to overstate the importance of China in the field of innovation, when quality is assessed the strengths of Japan, South Korea, Taiwan and Singapore are apparent. We expect these countries to remain at the forefront of innovation globally and this will be a decisive factor in meeting the demographic challenges in China during the next few decades.