Technology Stocks are not just about the software and hardware

Our view of a technology stock looks beyond the traditional sector classifications in equity markets. Large companies that are typically regarded as technology stocks like Facebook and Google have earnings that are driven by advertising revenue and have less intellectual property than that of Intel and Microsoft both of which control a significant number of patents, in the case of Microsoft and the subsidiaries, a portfolio in excess of 5,000 US and international patents.

We like the Alex Payne definition of a technology company, "You are a technology company if you are in the business of selling technology. That is to say, if your product – the thing you make money by selling – consists of applied scientific knowledge that solves concrete problems". With that definition in mind we look for companies with the drive to innovate their products and maintain patent protection over the technology. Two such companies are Lear Corporation and TS Tech, both are manufacturers of car seats and traditionally classified in the consumer discretionary sector.

Car seats are not usually associated with technology, the Wikipedia definition is typical, "the seat used in automobiles. Most car seats are made from inexpensive but durable materials in order to withstand prolonged use." That definition fails to capture the essence of a modern car seat which contains a wealth of technology hidden behind the durable exterior.

TS Tech is a business that started in Japan supplying motorbike seats to Honda, the business now operates in 14 countries with 16,000 employees supplying 70% of the seats in Honda vehicles. It is easy to overlook the level of complexity involved in the manufacture of car seats. This has become a business with very high barriers to entry. TS Tech holds 724 patents in Japan and 474 international patents in relation to their car seats.

The picture taken for the 2016 Lear Corporation Annual Report shows a breakdown of the value of the various components for car seats, the dominant element by value remains seat structure at $20 billion, however the comfort and electronics components which would have barely existed 20 years ago now account for $5 billion of the market value and it will be these elements that continue to grow as a proportion of the total value. 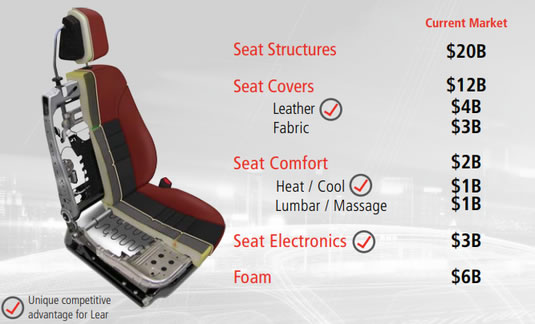 Both companies have demonstrated a flair for improving the design of seats, TS Tech in particular were key to the improvements in safety of headrests that has resulted in a dramatic reduction in the scale of neck injuries resulting from rear-end collisions. Improved seat design will be very important as we move into the world of self-driving vehicles where aspects of the traditional seating configuration are likely to become redundant. TS Tech are very strong in the design of seating configuration and we expect that this competitive edge will continue into the world of self-driving vehicles. Seats in the future will have the intelligence to anticipate and dynamically adjust to the needs of the occupant, this is an area of focus for Lear Corporation.

The J.D. Power survey now includes an element devoted to seat quality and satisfaction, with Lear Corporation and TS Tech achieving the highest ratings in the Luxury and Luxury SUV categories respectively. The strengths demonstrated by these companies at the luxury end of the market are a positive sign for the future as some of their design innovations filter into the mass market segment.

Both companies have applied technology to a manufactured item that previously didn't require much "applied scientific knowledge", they have protected their intellectual property with an extensive array of patents and consistently score high ratings from the end user in the luxury segment of the market, all of which combine to make TS Tech and Lear Corporation technology stocks. TS Tech is a key holding in our Asia Small Companies strategy and part of the Asia Small Cap Alpha Plus strategy.