The Development of Corporate Governance in Asia 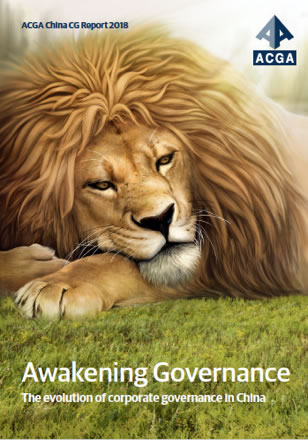 Early in 2001 Jamie Allen, Secretary General of the Asian Corporate Governance Association (ACGA) arrived in my Hong Kong office to persuade me of the merits of joining the ACGA. I didn't need much if any persuasion and have been a strong supporter of the ACGA in the seventeen years since that first meeting. I will be attending the ACGA Annual Conference in Beijing next month and will provide a report from that event which will assess the quality of corporate governance across the Asian region and publish governance rankings. Prior to attending that event I thought it would be useful to provide a brief review the development of corporate governance in Asia.

The ACGA was founded in 1999 as a non-profit membership organization dedicated to implementation of effective corporate governance practices throughout Asia. In those early years corporate governance was viewed with some suspicion by many investment management companies, in the subsequent years that suspicion has migrated to varying degrees of support across the industry. A large number of the codes and reforms implemented across Asia in the past two decades have been a direct result of ACGA engagement with governments and regulatory authorities.

Of all the countries in Asia, Japan has achieved the biggest transformation of governance standards in the past two decades. Cross shareholdings which acted as a defensive shield for poor performing companies have largely disappeared making companies much more accountable to their shareholders. The pace of change towards better governance in Japan has accelerated in the past five years with the implementation of two key codes, the Stewardship Code in 2014 and the Corporate Governance Code in 2015. The Stewardship Code prompted institutional investors to engage with companies, such engagement rarely took place prior to the Code coming into force. At the time of writing there are 221 institutional investment organisations in Japan that have signed up to the Code and have made the commitment to make public the issues they consider when assessing investee companies. We are now seeing the following issues discussed in public:

The management of companies in Japan has changed in response to the increased publicity associated with their performance, return on equity which had wallowed in low single digits for the market as a whole for more than two decades has improved significantly and should return to double figures within the next five years.

The Corporate Governance Code introduced in Japan during 2015 has provided guidance regarding the requirements for independent directors, appointment and dismissal of managers, executive compensation, responsibilities of boards and use of committees. Companies not complying with the Code are required to explain their behaviour and that have proved a powerful motivation to improve. A report published by the Tokyo Stock Exchange in September 2017 showed that 89% of listed companies had complied with at least 90% of the Code requirements.

The changes noted above have seen Japan rise to the best standards currently in force in Asia, Hong Kong and Singapore are not far behind. Hong Kong has been particularly good at requiring independent non-executive directors be appointed to boards. We tend to prefer Chinese companies that choose to list in Hong Kong in addition to or instead of a domestic listing in Shanghai or Shenzhen, Hong Kong has much better standards for disclosure and governance. The vast array of listing opportunities for Chinese companies has been described by the ACGA as an alphabet soup. China has some of the weakest governance rules in the region with the strongest enforcement measures. The ACGA published a major report in 2018 describing the evolution of corporate governance in China called Awakening Governance, the report is worth reading and is available to download from the ACGA website.

Taiwan has introduced numerous corporate governance initiatives in recent years which set the scene for significant improvements in the next decade. South Korea remains a disappointment when it comes to their approach to corporate governance, the persistence of the corporate conglomerates provides company management with little incentive to behave in the best interests of shareholders. The ACGA has been particularly active in Taiwan and Korea in recent years, encouraging the adopting of stronger governance rules and better enforcement measures.

Great progress has been made in the past two decades, regulators across Asia have built stronger corporate governance regimes. Looking forward, rules will need to be improved, however, the key change required will be the development of a more open corporate mindset about dialogue with shareholders, that improved dialogue is happening in Japan and if it can happen in Japan it can happen elsewhere in Asia.