What do we mean by a Technology Stock?

Last time we wrote about the 'hidden' technology in such seemingly mundane areas as car seats. We argued that paying a lot for 'technology' earnings made little sense when so much patented technology existed outside the technology sector, and at much cheaper valuations.

Our view of a technology stock looks beyond the traditional sector classifications in equity markets. Large companies that are typically regarded as technology stocks like Facebook and Google have earnings that are driven by advertising revenue and have less intellectual property than that of Intel and Microsoft both of which control a significant number of patents, in the case of Microsoft and the subsidiaries, a portfolio in excess of 5,000 US and international patents.

We like the Alex Payne definition of a technology company, "You are a technology company if you are in the business of selling technology. That's to say, if your product – the thing you make money by selling – consists of applied scientific knowledge that solves concrete problems".

With that definition in mind we look for companies with the drive to innovate their products and maintain patent protection over the technology.

We saw this story (in the url below) in the serious media recently and thought that it was worthwhile to repeat the observation about technology. Rather than pay up to invest in a company that monetises your personal data by selling it on, and that could just as easily be classified as a consumer cyclical company, wouldn't you rather invest in a company that actually does really useful stuff, such as cure people from nasty diseases where the procedures and molecules are protected by patents? That is, it meets the Alex Payne definition above. Especially if this company trades on a lower P/E?

Please take the time to click into, and read, this article.

The stock we highlight as a true tech stock in this article is Gilead. We own this in the High Conviction Strategy.

This company recently bought Kite Pharmaceuticals to enter the area of Chiro Antigen Receptor Therapy (CAR-T) for cancers. In other words the same principles as used in the medical procedures revealed in the story. Look toward the end of the article and read what Dr Steven Rosenberg of the USA National Cancer Institute says about CAR-T.

"Identify the rogue proteins and then re-programme and boost the body's own immune system to fight them and destroy them". This re-programming is preferable to radiation which is both exhausting and damaging to more parts of the body than the cancers. We have uploaded a flow chart of the process and have posted below. 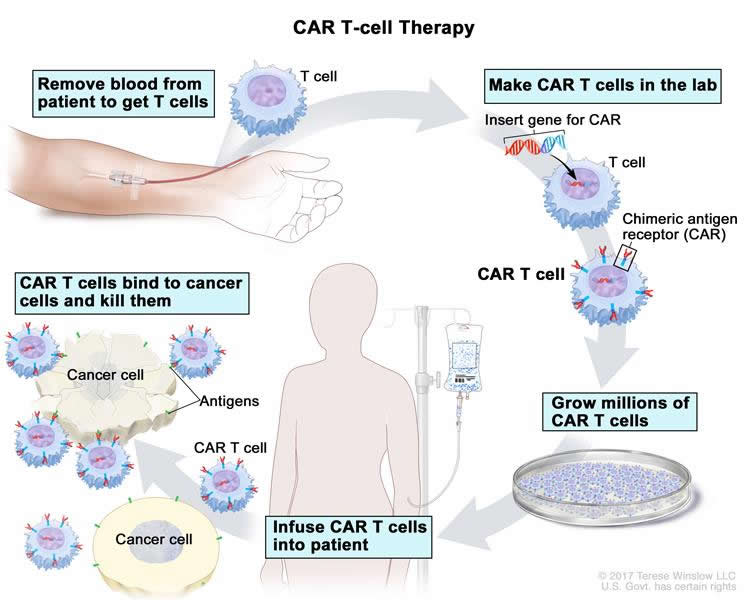 Gilead currently only currently treats blood cancers but solid tumours are now 'on notice'. Blood cancers are not in solid tissue and so somewhat 'easier' to treat, but it is now clear that a breakthrough in treating all cancers is possible with this re-programming technique. The treatment process in the article cannot be commercialised, but it may be 'yet' rather than 'never'?

The stock Gilead is on a modest valuation because everyone thinks that their technology pipeline is shrinking. Their major recent success was a Hepatitis C drug (which does actually cure people rather than alleviate symptoms) but this has a declining USA market although the Chinese market is potentially enormous. This 'lack of a pipeline' is a fallacy and there are other drugs in their pipeline along with CAR-T, that have promising potential to treat nasty stuff such as Non Alcoholic Cirrhosis (NASH) and Arthritis.

We think that the management has done well to avoid the siren song of Wall St to "make large acquisitions" or boost buy-backs and has a good old-fashioned approach to growth. "Reinvest and innovate". They seem to make good acquisitions too in that they benefit both sides in the transaction.

If you want to invest in technology that actually does something useful like improve health; want to invest for growth at a reasonable valuation; and want to invest in a company that manages to keep data securely, then we would suggest that Gilead is a better option than many 'technology' companies which appear frequently in other portfolios!