Protests in Hong Kong and the Impact on Equity Market Returns

Kevin Smith takes a look at some of the political issues that have contributed to mass protests in Hong Kong and the impact on the risk and return characteristics of the local equity market in the short and long-term.

In our September 2019 article “Reflecting on Policy Errors in the Administration of Hong Kong” we paused to reflect on the build up to three months of mass protests and escalating violence with “no end in sight” and the detrimental impact on both the stock market and economy. Following a quiet period as the population of Hong Kong adjusted to lock-down measures in response to the Covid-19 pandemic, we once again witnessed violent protests in recent weeks with at least 180 people arrested for illegal assembly and misconduct, but not rioting which carries a much high sentencing tariff if found guilty. The initial protest rally in mid-May was planned in response to plans to criminalise ridicule of the Chinese national anthem, however, Beijing subsequently announced plans to impose a new national security law on Hong Kong. This is a repeat of the plans previously announced in the summer of 2003 to introduce an anti-sedition law known as Article 23. Back then 500,000 people took to the streets on 1st July 2003 and the government quickly backed down and withdrew the legislation. The fear with that piece of legislation was that even mild criticism of the regime in China could be interpreted as a breach of Article 23 and subject to harsh penalties. The same fears have been sparked by this new version of the legislation together with the idea that this law could be applied retrospectively to the people arrested in the protests last year.

When Hong Kong ceased to be a British colony in 1997 the transition to full Chinese sovereignty was to be delayed for fifty years under the Basic Law. During this transition period Hong Kong operates as a Special Administrative Region (HKSAR) of China hence the term “one country, two systems” with the HKSAR enjoying autonomy for all issues except foreign policy and defence. To quote Jonathan Robison, “one country, two systems should not be viewed as a framework for liberal democracy, something Hong Kong never had under the British, but as a compromise over what the Communist Party can tolerate.” China is moving to full control of Hong Kong; in 27 years the Basic Law will have expired and a full range of national security measures will be applied to the HKSAR. It is very unlikely that protests of the type seen in the past year will be tolerated.

The built up to the handover in 1997 saw hundreds of thousands of local Hong Kong residents taking steps to acquire foreign nationality especially in Canada, Australia and the United Kingdom while many companies registered in overseas jurisdictions especially Singapore, Bermuda and the Cayman Islands to protect their corporate assets. Many HKSAR residents will now be deciding if their long-term future is tied to Hong Kong or should be elsewhere. This time around, alternative destinations for residency are likely to be located within Asia with a focus on Singapore, Japan, and Taiwan. In early June UK Foreign Secretary Dominic Raab, followed quickly by Prime Minister Boris Johnson announced plans to offer as many as three million Hong Kong residents the chance to seek a new life in the UK. This would be achieved by upgrading the rights associated with British National (Overseas) passports that were issued to Hong Kong citizens in the 1990s prior to the handover. This plan is very unlikely to be enacted and is much more likely to be seen as an application of political pressure on Beijing. In the 1990s there was widespread disappointment in the limited “rights” associated with the British National (Overseas) passport with the chance of residency in the UK explicitly excluded from Hong Kong citizens at that time. A complete reversal of that long held position by the UK Government is extremely unlikely. Just like 1997, the vast majority of Hong Kong residents are likely to choose to stay, and the deciding factor will be the evidence of how the economies in Shanghai and Shenzhen have been allowed to flourish, with the Beijing authorities doing very little to interfere with the operation of those markets and economies.

One of the original trading firms in Hong Kong, Jardine Matheson Holdings, which moved their business registration from Hong Kong to Bermuda prior to 1997, issued a statement in support of the new national security law. Taking a full-page newspaper advertisement, they stated “Jardines Group has roots in Hong Kong and will continue to invest. Its promise to Hong Kong has never changed.” The new security law also drew support from the nine richest people with businesses in Hong Kong including billionaire’s Li Ka-shing and Michael Kadoorie. HSBC which initially held back from any comment subsequently signed a petition in support of the security legislation and stated their “support for laws that stabilise Hong Kong’s social order and revitalize the economy under the ‘one country, two systems’ principle”. The support of big businesses in Hong Kong will be a key element contributing to ongoing success for the economy.

Equity markets react badly to uncertainty, the combined impact of political unrest and the Covid-19 pandemic has impacted Hong Kong as shown in Chart One, with a decline of 18.72% in the current year which is worse than the 4.35% decline in the United States and the World average fall of 7.95%. The impact on ten-year numbers is very marked with Hong Kong lagging behind the United States and World averages, with growth of 6.60% per annum versus 13.22% and 9.90% respectively. From a longer-term perspective Hong Kong remains one of the strongest markets in the world with annual returns in double figures at 10.35% per annum, very similar to the United States at 10.56% and well ahead of the World average return of 7.69% per annum.

Chart One: Comparison of Market Returns for Hong Kong vs. The United States and the World. 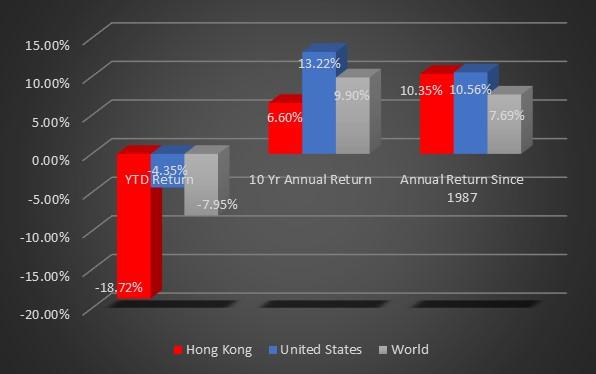 Chart Two shows that Hong Kong has a number of very favourable attributes in particular a price to book value of 1.01x which is less a half of the World average of 2.38x and less than one third of the extreme levels now being recorded in the United States at 3.52x. The price to earnings ratio in Hong Kong at 13.35x in in line with the long-term average, while the World average and in particular the United States stand well above their long-term numbers of 15-16x.

Chart Two: Comparison of Valuation Attributes for Hong Kong vs. The United States and the World. 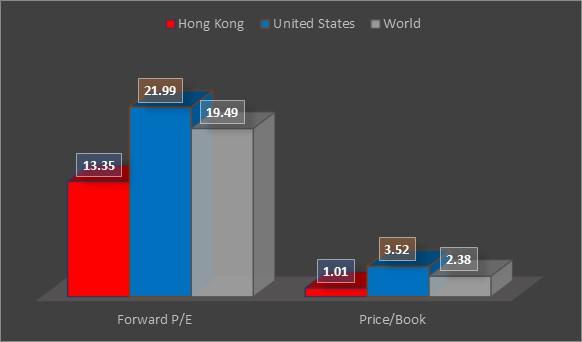 Chart Three: Comparison of Volatility Attributes for Hong Kong vs. The United States and the World. 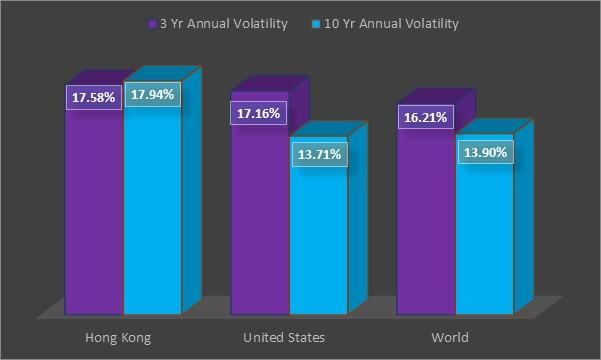 In conclusion, the protests in Hong Kong while impacting short-term returns achieved by that market have not altered the longer-term volatility characteristics of the market versus the United States and the rest of the World. Despite weaker returns achieved in the past decade, Hong Kong remains one of the few markets to achieve more than 10% annual average returns in the past thirty years. Those strong returns were not achieved at the cost of high and rising equity market valuations, in terms of price to book and price to earnings Hong Kong is valued well below the United States and the World average. Hong Kong is well placed to produce a strong recovery in the equity market when calmer politics prevail.